My boyfriend and I are en route to a state I’ve never been to before. He’ll be doing his annual flight training and I’ll be hanging out with my high school cross country teammate!

He’s a commercial pilot and was automatically upgraded to first class. I’m 6 rows behind him in economy with the rest of us peasants. (He offered to slum it back here so we could sit together but I told him we didn’t have to. He will be studying and I am blogging!)

Getting off of work on the Friday afternoon before vacation is a special type of joy. So I was in a good mood heading home last night! I knew Zeb was coming over around 5pm, and our main goals for the night were to pack for this trip and study for his exam. But I felt like having a little fun before that 🙂

Before I got home, I detoured into the Bi-Mart parking lot for travel snacks. I stocked up on pistachios, beef jerky, larabars, fruit bars, and some sweet potato crackers.

When Zeb arrived, I greeted him with a proposition.

“Do you feel like grabbing a margarita before we study? There’s a new bar in town, I met the owner in the Bi-Mart today. Apparently it’s pretty small but we can probably get in tonight.”

He said it sounded good! I offered to drive us since I know where it’s at. We hopped in my car and I drove us out of the apartment parking lot.

Now the town I live in is pretty small, and there’s only one main strip of local restaurants and storefronts. It’s pretty obvious when you’re driving in the opposite direction, so Zeb got suspicious pretty quickly.

“Where are you going?”

By then I had already made 3 lefthand turns taking us in a square around my residential neighborhood. A couple seconds later my apartment building came back into view.

“It’s called Casa de Estes Chica.” I pulled back into the driveway and parked in my same parking space. “It’s new so the service is really slow. But the drinks are strong and the waitress is super cute.” 😉 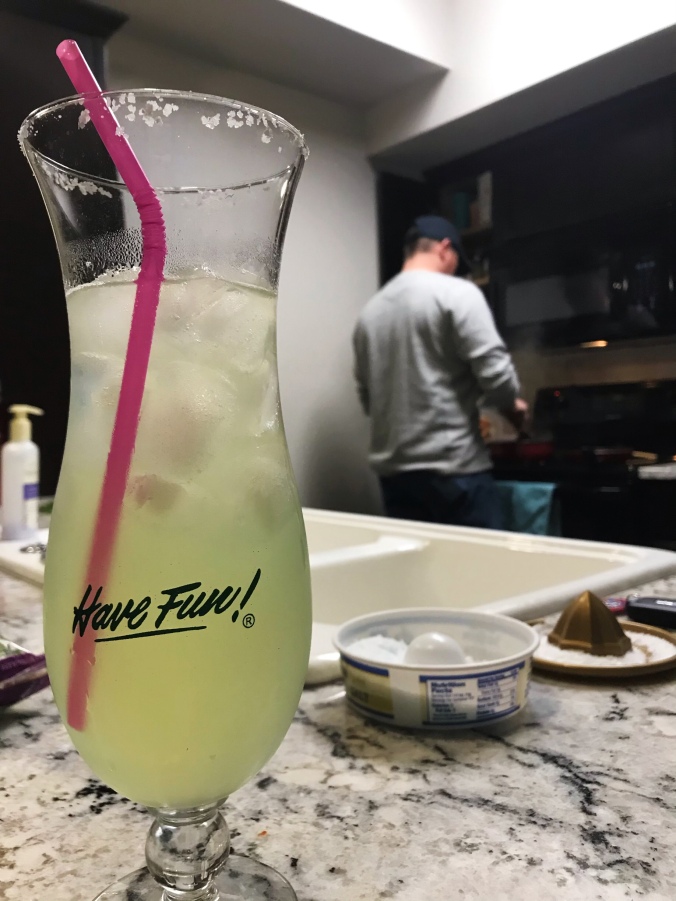 He couldn’t believe I just drove us around the block for no reason but thought it was pretty funny and we both liked the idea of homemade margaritas at home best anyways.

I told him how I had been giggling in my head when he asked me “is what I’m wearing okay? Do I need to change into something nicer?” on our way out the door. No, the dress code is pretty casual in this joint 😉

I played the bartender and he played the chef. He made himself street tacos and I used his fillings for a taco salad. I would definitely give this place a 5 Star Yelp Review! Such friendly staff…

This morning I ran on my treadmill, cleaned up the apartment, and then we were headed to the airport! I wish I could say our destination has warmer weather than we leave behind in Idaho but that would be a lie. My suitcase is loaded with beanies, scarves, earmuffs and sweaters!

I’ll check in with you and let you know what we’re up to on Monday. Xo, kenz